Late Summer, early Fall signals the ripening of one of the most prolific, delicious foraged foods I’ve ever know. In this post we talk about how to forage for the Autumn Olive.

The name ‘autumn olives’ might have crossed your mind one time or another. Or, it could have been autumn berry.

It is sometimes also called the Russian Olive or silverberry (because of the silver sheen that the berries have).

This invasive plant’s scientific name is Elaeagnus umbellate. It is a native species to Eastern Asia and in North America it is considered to be an invasive shrub or small tree throughout the United States, especially in the Eastern half of the United States and also in the Northwestern states.

While it’s invasiveness is unfortunate, it is an excellent supply of food for wildlife, and the knowable forager as well!

If you’re interested in learning more about Foraging (and let’s be honest, who doesn’t love FREE, health food!?) I can’t recommend Herbal Academy’s course enough. They walk you through where to look, how to find, and how to harvest wild edibles in the most respectful way possible. 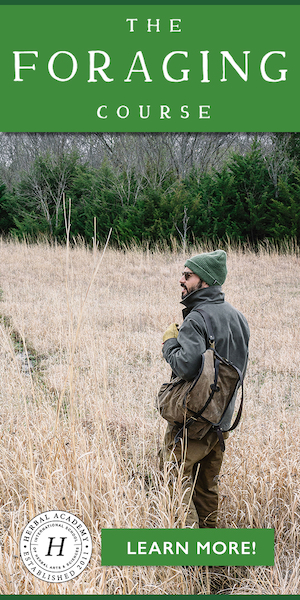 What is an Autumn Olive?

Back in the 1800s, people from East Asia brought the olive shrub to the U.S. because it made a beautiful ornamental shrub.

It was also planted because of its ability to provide food and shelter in the wildlife habitat.

Around the 1950s, it was planted everywhere by the U.S. Soil Conservation Service to help erosion control.

This worked out for a while, but it wasn’t long until it was realized that Autumn berries are noxious weeds.

With this wild fruit lurking around everywhere, even in forest edges, vacant lots, coastal sand dunes, and roadsides, the tendency is that it increases the nitrogen levels in the soil, resulting in poor soil for native plants that prefer a lower level of nitrogen in the soil.

An autumn olive bush is easily spotted. The olive tree grows up to 20 feet high and 30 feet wide and has a lot of small branches.

The best way to spot this deciduous shrub is to take a look at its leaves. The underside of these olive leaves are alternative leaves and have a silvery look.

Olive flowers usually show up in early spring and are usually creamy or yellow in color. The unripe fruits are usually silvery and yellow.

In late summer—around late August, or early to late fall like early September, late September, or early October the red berries start to ripe and have silver scales.

This is also the reason why one of its common name is Japanese Silverberry.

Bush honeysuckle berries are squished, they usually have a yellowish-orange appearance.

On the other hand, an olive berry is usually a red berry with speckles, and when squished, has a deep red color onto it.

The berries can have quite an unpleasant taste before the first winter frost. This is because it has high levels of tannic acid.

But the good thing about this is you can still forage these berries well into the Winter (assuming the wildlife leaves any for you).

Why Autumn Olive is a Forager’s Delight

I absolutely love the Autumn Olive. The shear abundance of fruit, at a time when my vegetable garden is starting to die down, it nothing short of miracluous to me.

Another bountiful Fall forage is Paw Paw. I’ve wrote another post about how to forage for Paw Paw here.

In addition to it believe delicious, and plentiful, Autumn Olive is also extremely healthy for you!

Foraging autumn olive is one way to improve your health because of its nutritional benefits. One of the reasons foraging is so important to my family is that wild foods tend to be more nutrient-dense than their farmed counter-parts.

Autumn olive contains lycopene which can improve your heart condition and lower your risk for cancer. It is also an antioxidant.

In addition to being good for you, Autumn Olive is one of the most bountiful wild edibles you can forage. Each tree produces thousands of little red berries. I don’t worry about how much I harvest because i know there will be plenty left for wildlife.

Because it grows so much, we always cut Autumn Olive back in the Fall so it doesn’t keep encroaching on our pasture. We always trim back when the berries are ripe, so we can pick the berries right off the trimmed branches and kill two birds with one stone.

Almost any road-side, or construction site, or anywhere with disturbed soil can support Autumn Olive. At least in Virginia, you don’t have to look very long to find it. They like sunlight, so they’ll find tree lines, or fence lines, or the sides of roads to establish themselves.

My son’s favorite thing is to show other kids who visit our homestead the Autumn Olives, and watch their faces as they take their first bite! While you might expect sweetness out of a red berry, Autumn Olive’s berries are tart. And I mean, suck-the-saliva-right-out-of-your-mouth tart!

However, no matter how tart they are, we have yet to have a kid NOT eat them! I joke with their parents that they can leave their kid to forage for lunch and not have to feed them later.

How to Forage for Autumn Olive

Autumn olive is easily recognizable for those who know what it looks like. However, if you’re still a foraging novice, there are some great apps that can help you identify plants.

Late Summer/Early Fall is when they’re most ripe, and you’ll notice the branches simply bursting with little red berries with a silver sheen.

You can pick them off by hand by simply teasing a clump of berries with your fingers, or clip the branches down, like we do, and spread them over a table to harvest by hand.

Pro tip: invite your friends to help! Many hands make for light work, and there will be enough harvest that each one of you will be able to take home buckets of fruit.

Autumn olives can simply be snacked on while you’re working outside, or sprinkled over salad for a bright pop. Below I’ve gathered recipes from Pinterest you can try too!

This year I’m making an autumn olive wine…but more on that later!