It’s time for a homesteader’s confession. Homemade bread is hard to make! I’ve attempted to make it a dozen times, only to have it come out hard as a brick. Literally, one batch I tried to make in a bread machine (foolproof, right??) was so hard and dense, the dog had a hard time breaking into it.

I felt down-right foolish. My husband took me out to a very fancy dinner for our anniversary one year, and when the owner came out to say hello I complimented him on the bread they served. He went on and on about how easy the recipe is, and how anyone could do it. I went home that night and tried, but it turned out HORRIBLY. Clearly I was missing something important that everyone else seemed to know!

Then, I found the perfect recipe! It was light, fluffy, froze well, and was so delicious we ate it up within days. A few days passed and I lost the recipe! I was so hesitant to try again after that failure, however after months of searching I found it again!! Bless the internet-gods!

This is easily the best recipe out there. It’s foolproof, easy, can be made manually or with a standing mixer, and down-right delicious. Your family will have a hard time going back to store-bought bread after this.

I’m not a fan of healthy bread. I grew up on white wonder bread, and I have a HARD time eating anything else. Except for this loaf bread. So even if you have a picky eater in your household, or your husband’s not 100% on board, give it a try. My hubby’s favorite way to eat it is with olive oil and balsamic vinegar.

This recipes makes two loafs, and I accidentally let one loaf raise all night. (I signed up for an Ancestry.com account and got very sidetracked.) But once I baked it the next morning it was still delicious!

Now I bake two loaves every Sunday. The smell of freshly cooked bread is heavenly, the bread itself gives me a sense of pride, and I know exactly what ingredients went into it! Can’t beat that! BONUS: Reader Melinda modified this recipe and made cinnamon buns! Try her version too:

“I made the bread recipe, let it rise once, flattened it out on the counter, spread a teaspoon or so of soft butter on the dough, then sprinkled on probably a cup of the cinnamon/sugar mix that I added a tablespoon of cocoa powder to (for color…you don’t taste it), rolled up the dough and sliced into roll size pieces. I used a buttered 9×13 pan and put it in the refrigerator to rise overnight and took them out in the morning and baked in a 350* oven for 1/2 hour or so? I made a simple icing with powered sugar and milk and added a splash of vanilla and drizzled it over the top. Viola’ warm cinnamon rolls for breakfast. They disappeared quickly!” 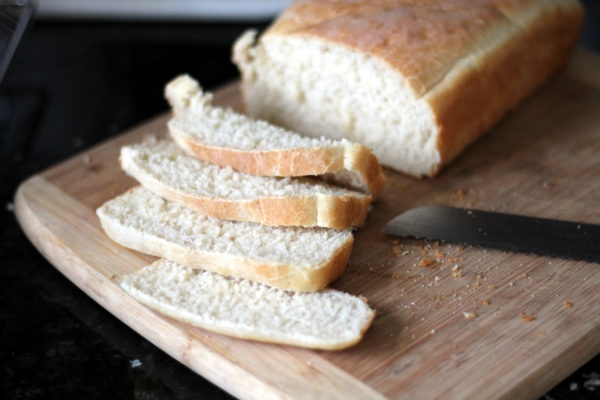