Bread and butter pickles are a great, easy, beginning canner’s recipe. It’s not as labor-intensive as most recipes, doesn’t require a ton of processing time, and it’s honestly hard to screw up!

How Bread and Butter Pickles Got Their Name

Bread and Butter Pickles reportedly got their name because they would be served on bread and butter sandwiches. The first written account of the phrase “bread and butter pickles” happened in the 1930’s when a pair in Illinois was selling them as sandwich pickles. However cucumber sandwiches were a popular English cuisine long before then.

For the BEST, fool-proof white sandwich bread recipe, check out my The BEST Homemade Bread Recipe.

And for the EASIEST homemade butter recipe, check out my How To Make Butter At Home.

I’ve also heard bread and butter pickles’ name stuck, however, because they sell out so quickly at Farmer’s Markets they’re a canner’s bread and butter. Quarts can sell for as much as $8 a piece!

They’re both sweet and tangy, and the pickling ensures they keep their crispness, which is so important in a sandwich.

If you haven’t pickled anything yet, check out Phickle’s post on What is a Pickle. Amanda goes into great detail on what making a pickle actually does (and how it differs from fermentation).

This recipe walks you through preparing your cucumbers for canning, making the pickling juice and how to can them. While the whole process does take a lot of time, it’s mostly downtime, waiting for the cucumbers to brine. If you’re short on time, you can always soak them in the brine overnight in the fridge.

Alternatively, if you want to eat them fresh, mix together the pickling liquid and simply store them in the fridge in a mason jar. Honestly, most of mine don’t make it to canning because the Hubby and baby both get to them first!

Have you ever had more than a canning recipe called for? Or less? I struggled trying to find the processing times for what I was canning, so I created two easy printables: canning times (both boiling water and pressure) for common produce – in pints and quarts. And I’d like to give them to you for free!

These pickles, however, are great sides to eat by themselves, or alongside burgers and brats. My favorite way to eat them, however, is on toasted bread or naan bread, with goat cheese, spinach and a mustard vinaigrette. Yummm….now I’m hungry.

If you haven’t ventured yet to grow your own cucumbers, I highly recommend them. They grow great vertically, given a trellis, or can spread along the ground if you’ve got the room. Check out my 30 Second Guide to Growing Cucumbers to get started. This year we’re going to create a tunnel out of cattle fencing for the cucumbers to grow up and plant lettuces below it in the shade. I’ll post an update letting you know how it works out!

What are you favorite pickle recipes? Do you make your “bread and butter pickles” differently? I’d love to hear about your recipes! Drop a comment below! And of course… 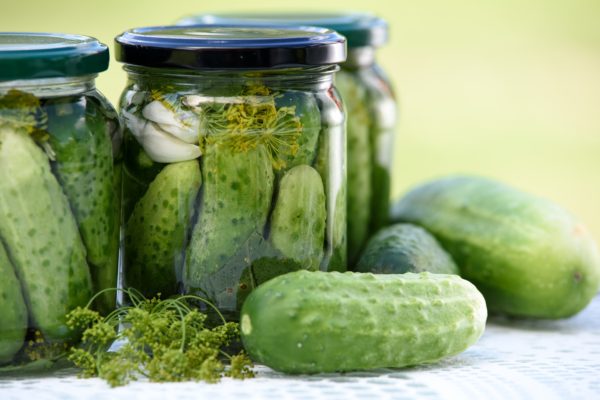