There are two times in the season you’ll want to pick green tomatoes – at the beginning, to encourage more growth and enjoy two harvests – as well as at the end, right when the frost is setting in. But what do we do with all of those green tomatoes we’ve harvested? Cook with them of course! And my absolutely favorite green tomato recipe is this one – green tomato marmalade.

Green tomatoes are not to be confused with tomatillos (which are actually called tomatos verdes – or green tomato – in Spanish). Tomatillos look like small green tomatoes covered in a papery husk. They can often be used interchangeably, though, so check your recipes carefully.

Just this past weekend I noticed that my tomato plants looked a little worse for wear. We’d had a couple surprise frosts that I didn’t prepare for, and the tips of the plants were starting to die and curl. Instead of trying to battle the inevitable coming of Winter, I decided to harvest all of my green tomatoes and make lemonade out of lemons (or marmalade out of tomatoes?)

I went to The Virginia Housewife (click here to buy it on Amazon or get a free online copy here) and found recipes for both Tomato Marmalade and Tomato Sweet Marmalade.

While I LOVE historic recipes, and applaud Mary Randolph’s attempt at standardizing recipes (she was the first woman in America to write a cookbook!) her recipes can be frustratingly vague.

For example, her recipe for Tomato Marmalade is:

Gather full grown tomatos while quite green; take out the stems, and stew them till soft; rub them through a sieve, put the pulp on the fire seasoned highly with pepper, salt, and pounded cloves; add some garlic, and stew all together till thick; it keeps well, and is excellent for seasoning gravies, &c. &c.

Prepare it in the same manner, mix some loaf sugar with the pulp, and stew until it is a stiff jelly.

So I took a stab at following her instructions, while taking measurements and notes to give you my best approximation of her intentions. It never stiffened up to what I would call a jelly but it is delicious!

Looking at other recipes, I think it would have jelly-fied if I had added a TON more sugar, but I’m afraid that would’ve ruined the flavor of the tomatoes.

How to Make Green Tomato Marmalade

To make this recipe, roughly chop up about 5 lbs of green tomatoes. You do not need to peel or core them.

Put them in a large soup pot and cook, on low, for roughly an hour or until they’re very soft and translucent, like this:

Then put a sieve over a large bowl like this:

Push the pureed tomatoes through the sieve to remove the seeds and pulp. You’ll be left with this:

Return the liquid to your large pot (after you’ve rinsed it), and add the sugar and lemon juice. Cook it again on low, until thickened. You’ll want to keep it covered as it bubbles and spurts and makes a mess!

Wipe the rims and submerge them in a hot water bath for 10 minutes. Tomatoes are very acidic, and sugar is a preservative so you don’t need much. In fact, it’ll probably last awhile unopened in the fridge.

Spread over a bagel with cream cheese is my absolutely favorite way to enjoy this!

For more fantastic canning recipes, check out my favorite books:

Can It & Ferment It: More Than 75 Satisfying Small-Batch Canning and Fermentation Recipes for the Whole Year

Not Your Mama’s Canning Book: Modern Canned Goods and What to Make with Them 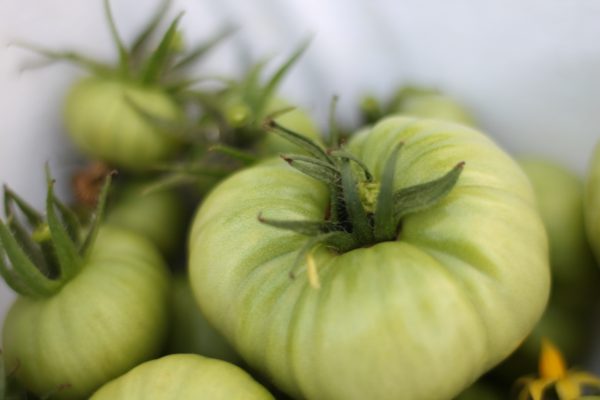